04 Nov Is this the Bottom of the Stock Market Fall?

Posted at 19:46h in Analytics, Mentoring, Stock Market by mbadmin

This is the most frequently asked question I get when the markets decline sharply, or around that magical 10% level â€“ or what is commonly referred to as a â€œCorrectionâ€.

Memories of the big stock market crashes such as the Global Financial Crisis (GFC) in 2007/08, the 2000 Tech Bubble, 1997 Asian Currency Crisis, Black Monday 1987, and last but not least, the Great Depression of 1929, keep market participants in the grip of fear. Especially when there is a â€˜little hiccupâ€™. 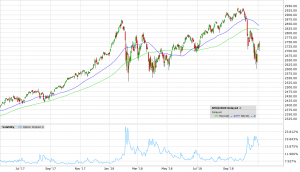 See, every major market crash has to start somewhere. A 50% crash started out as a 10% Correction, gathering momentum because investor fear triggered selling activity and economic or fundamental data didnâ€™t provide enough confidence for buyers to accumulate as prices dropped.

So letâ€™s take a look at the forâ€™s and againstâ€™s for whether or not the current market activity is the bottom of this correction, or if there is more to come.

For: This is the bottom of the market!

Against: There is more for this market to fall!

Iâ€™ve never been one to panic in the markets.

Fact is Iâ€™ve been through enough Corrections, Crashes and moments of Uncertainty to know whatever the outcome, the management approach I adopt to portfolio and individual positions will survive the hardest of times.

Many of my clients and readers do not have that same level of confidence, however. I understand this, because I had to start somewhere myself. Cutting my teeth with the Tech Bubble in 2000.

But I am not in the game of prediction. We can form opinions on what the markets could do, providing evidence for why. None of us know exactly what will happen.

I donâ€™t want to sound like the â€œtwo handed economistâ€ â€¦ on the one hand the markets could do this, but on the other, they could do that!

So based on the current data, whilst I see potential that the markets could create a larger movement than a 10% correction, there is no evidence right now that this current decline will result in a broader crash.

Leading US indices have declined to 2018 low levels. Thereâ€™s uncertainty around Mid-term elections, but earnings results are mostly positive despite some of the leading companies missing.

My approach will be to evaluate the markets holding current levels, building confidence again for a potential recovery. I couldnâ€™t say if that will result in new long-term highs or if we become range bound for a while.

But my strategy will be to accumulate/enter long around these levels. If we breach these 2018 lows, I will evaluate and reconsider. But for now, a little patience could offer some great prices in an economy that hasnâ€™t provided evidence of declining and a market that hasnâ€™t shown panic.